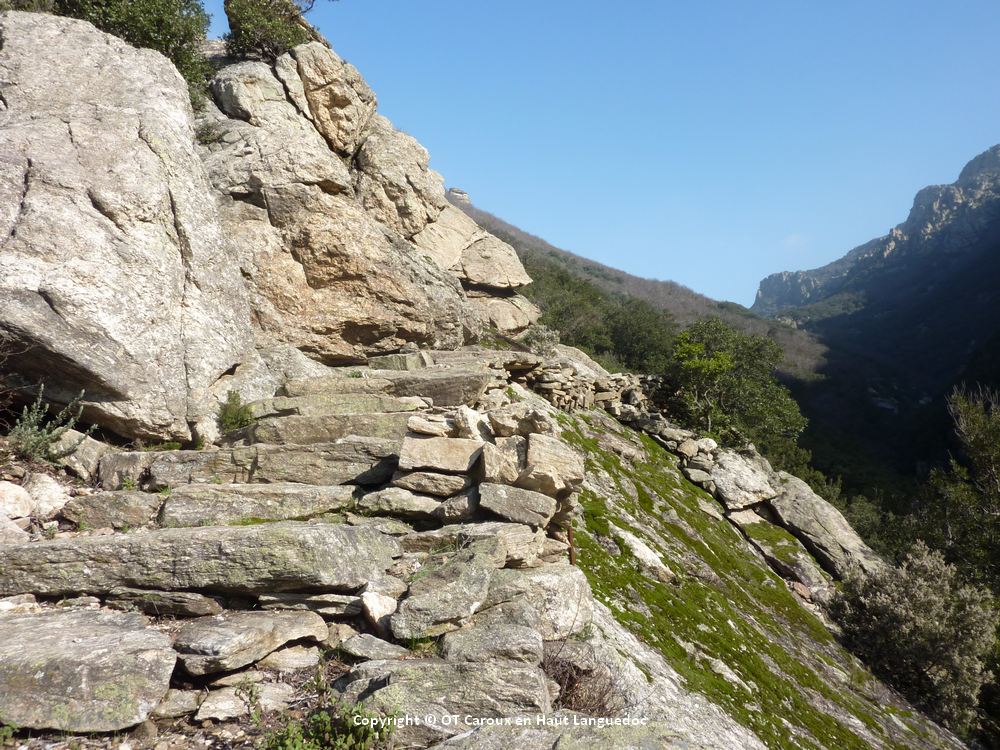 Since the dawn of time, paths and trails have shaped our territory. Before the advent of man, wild beasts, in search of food and shelter, moved around creating the first tracks. Men followed them closely, hunting them for their flesh, during their migration, digging even deeper into the rock, paths and trails.

With the advent of domestication, the paths were used over and over again, particularly during transhumance. This excessive pressure meant that they had to be consolidated and many of them, in steeper sections, were "caladed" or even walled on both sides to channel the cattle (drailles). As agriculture developed, man gradually nibbled away at the mountain, erecting terraces and access paths. Then commercial exchanges created the great communication routes such as the Via Domitia (around 120BC), linking Spain to Italy via Narbonne. As usage evolved and human activities changed, real architectural masterpieces were abandoned to the onslaught of vegetation. Some very beautiful remains have been unearthed, on the site of Ambrussum near Lunel with its bridge over the Vidourle, or the oppidum of Ensérune near Béziers, allowing the general public to become familiar with the Gallo-Roman period. The route of the Voie Domitienne is now covered by railways and the A9 motorway.

Since the end of the 19th century, 600,000kilometres (37,2822.7miles) of paths have disappeared in France with new uses, the passage of motorised machines that degrade the tracks, eroding the soil, agricultural regrouping or simply oblivion erasing forever a part of our history. Fortunately, today, these paths have found a new vocation thanks to hiking, leisure and hunting activities and also thanks to history and nature enthusiasts, ready to roll up their sleeves to uncover bits of a past not to be forgotten. Farmers, beaver farmers and wine growers, through their activities, are also working to restore this ancestral heritage. On the territory of the Pays Haut-Languedoc et Vignobles, there are currently 2,600kilometres (1,615.5miles) of described and signposted itineraries, most of which follow ancient paths.

Thus, the paths, trails and tracks that we walk along today, for our simple pleasure, bear the imprint of those who once walked along them, engraving their history forever in the rock. Travelling along them means keeping their memory intact forever.