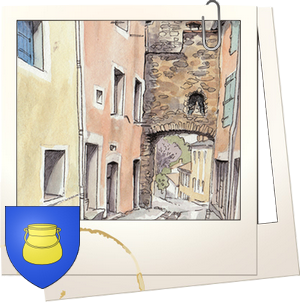 Olargues, listed among "The Most Beautiful Villages in France", is located along the Jaur river, 6 km upstream from its junction with the Orb river, in a narrow valley south of the mountains'' Espinouse”.
Olargues has the distinction of being located on a bedrock forming a hill, "puòg" in Occitan, which gives its name to a neighborhood of the village. It is almost surrounded by the waters of the river.
Heritage History
Listed among the most beautiful villages in France, Olargues is a formerly fortified hilltop village, with Caroux Massif in the background
The village is clinging to a rocky summit with the old dungeon of a medieval castle turned into a bell tower. The Devil's Bridge, below, was built in the twelfth century.
The perfect architecture of the site and its typically medieval character dictated that Olargues be listed and included in the''national inventory of sites.”
Do not forget to visit the Museum of Popular Arts and Traditions in the center of the village, in the famous staircase of the Commandery, above the Saint-Etienne chapel.
Onthe marked hiking trail “Malviès”, you will discover the Peyro Escrito (Written Stone), classified as historic monument.
Village Map

Hiking in Olargues:
- PR Malviès: a hiking card and three factsheets available for € 1 at the tourist office

Festivals:
Each year in Olargues, the “wheelbarrow and gardeners festival” (the first Sunday after May 11th ), fireworks on July 13th , Festibaloche (in August), the Medieval Festival (third weekend in September) and Olargues' chesnut festival (the first weekend after Halloween).
Other events are regularly organized. Information at the tourism office 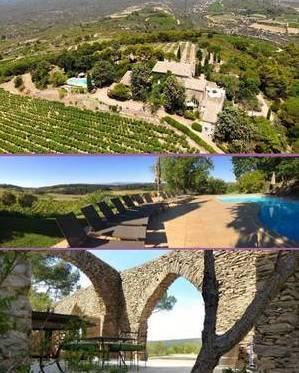