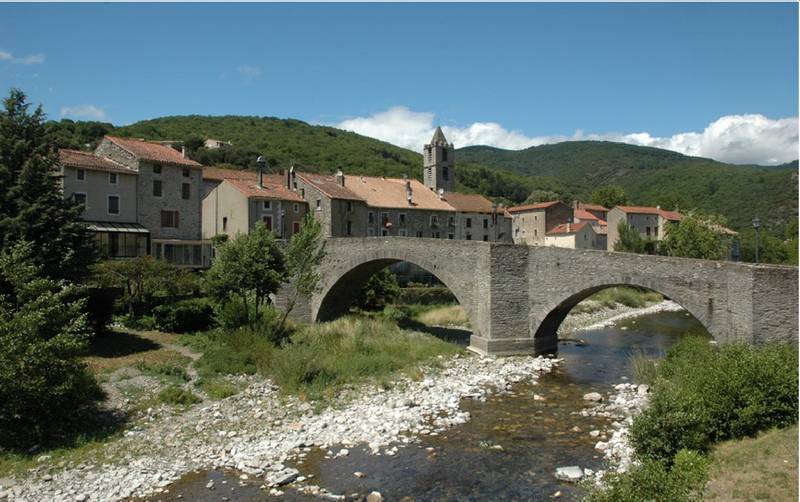 A historical break on the Hérault-Tarn border

The commune of Riols is situated between Saint Pons de Thomières and Olargues; it stretches along the Jaur valley.

Its particularity is that it has a much larger municipal territory than its neighbours! The other peculiarity of Riols is the appearance in 2004 of the first windmill of the avant-monts in the heart of the national forest, on the heights of the Serre Longue. It culminates at 728m, 4km from the Rodomouls pass, and dominates the village of Riols and the Jaur valley with its 50metres high mast.
Another emblematic place, the col de Rodomouls, is a historical break on the Hérault-Tarn border.

The Chapel Notre-Dame-de-Trédos, emblematic as well as majestic, is worth the hike leading to its doors.
On either side of the Jaur valley, from the lake of Vesoles to the 19th century former Ardouane abbey, this very extensive commune has many hiking trails leading to the Monts du Somail. The magnificent Banasse bridge over the Jaur, as well as the church of Saint-Pierre-et-Paul and the alignment of the rue Basse, the main artery, bear witness to the prosperity of the textile industry, particularly drapery, from the 16th century onwards.

From the village, a small road leads to the Cabarétou pass, a real challenge for sporty cyclists! The Voie Verte Passa Païs (Green Way) invites the gentle journeys adepts to daydream.

The history of Riols is linked to Saint-Pons-de-Thomières: in 936, the abbey charter of foundation, mentions the donation made to the monastery by Raymond Pons, Count of Toulouse, of the lands of Tarbouriech, Les Coumayres, Condades, Cassillac, and Rieulets.
In 940, the archbishop of Narbonne ceded the churches of Saint-Pierre-de-Riols and Notre-Dame-de-Tredos to the abbot of Saint-Pons.
The whole territory of Riols finally formed a seigneury belonging to the abbey of Saint-Pons.

In 1318, when the diocese of Saint-Pons was formed, the abbot became bishop and the monks formed the chapter of the cathedral.
The income of the abbey was then separated: in Riols, the chapter kept the seigneurial rights over the lands of the Garrigues, including the mazades of Bégot, Condades, Aupigno, Roulio, Marso and Cassillac, while the bishop kept the rest of the seigneury.
During the Revolution, the rare goods of the clergy and emigrants were sold.
In the 19th century, Riols, with more than 2000 inhabitants, became a small industrial centre, with more than a dozen sheet factories and woollen mills.